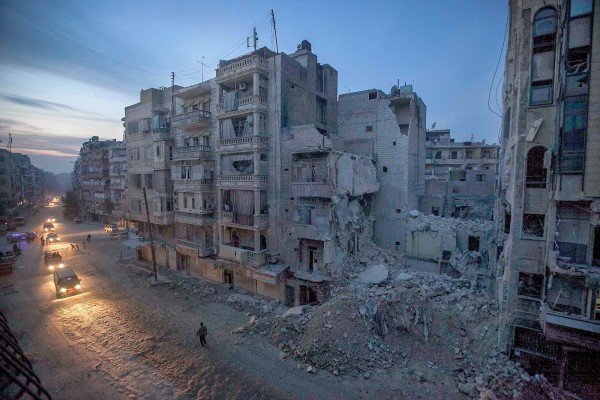 A recent report of the UN Secretary-General states that in Syria as many as 4.7 million people are residing in places that are difficult or impossible for humanitarian actors to reach. Of this group, 241,000 are from besieged areas. Reaching local populations in need has been problematic since the beginning of the conflict, but over the past two months it has become even more difficult to deliver aid where the Islamic State (IS) controls the territory – among the provinces of Raqqa, Hasakeh, Aleppo, Deir Ez-Zor.

The involvement of Western states in the war against IS, while being the most important aid providers in Syria, has further complicated the situation and is narrowing the window of humanitarian aid in northern Syria. This brings back the complicated question of the politicisation of humanitarian assistance. The higher the politicisation gets, the more likely it is to have deeply harmful consequences for the populations most in need. The Syrian actual context is another example of the impossibility for humanitarian aid to remain neutral when international actors are simultaneously pursuing a military and a humanitarian agenda. A choice between playing a military or a humanitarian role is essential in order to deliver proper aid to local populations in need.

When IS started consolidating territory in Syria, it allowed aid groups to work in areas under its control with few restrictions. The relationship between aid agencies and IS worsened in September 2014 with the beginning of the air strikes conducted by the United States (U.S.) led-coalition over Syria. Since then, the US and its allies as well as IS encounter problems distinguishing their fight on the one hand and their necessary humanitarian collaboration on the other hand. This complex double role played by Western actors undermines neutrality of humanitarian assistance and as a result has made it even harder for aid agencies to work towards getting aid to the populations in need. Those issues pose a dilemma for aid agencies that have to decide whether to keep providing aid.

In October, the U.S. was believed to carry on delivering aid into Raqqa and Deir Ez-Zor. But by late November, it had been forced to cut back. “We have not avoided an area because IS has taken control of it”, a State Department official said. “But in some areas where IS commanders are in control, they’ve interfered with the way we’ve delivered aid, so we stopped.” Some would argue that the solution to this problem is to keep humanitarian aid clearly separated from military action. This, however, is not a realistic possibility in situations where the same actors play both roles simultaneously. The case of Syria provides further evidence of this insurmountable conflict of interests.

With this double role played by the U.S., IS fighters do not consider American – or western – humanitarian aid as neutral. The organisation is showing ever more reluctance to work with agencies representing the governments involved because they are seen as being part of the American military agenda. It results in flawed humanitarian assistance with high risk for aid workers as well as of aid being misappropriated. Not only the aid about to be delivered is in danger, products and facilities that are already installed suffer from the same problem. A similar situation has been already faced in Somalia with the Al-Shabab group as well as in Afghanistan with the Taliban. In both cases the same actors have been conducting humanitarian and military actions at the same time.

By pursuing both a military and a humanitarian agenda, the U.S. cannot credibly remain neutral as an aid provider. Even if warring factions are genuinely interested in humanitarian concerns, they tend to find that mutual distrust and antagonism makes it impossible to negotiate terms. Moreover, the U.S. has no other priority than to “defeat” IS, and any attempt at humanitarian cooperation is half-hearted at most. Since the summer, IS is indeed perceived as “the enemy” to defeat and it appears then ethically unacceptable for the U.S. and its allies to negotiate with the organisation.

Most importantly, not only aid coming from the United States Agency for International Development and other governmental agencies is at risk, the whole humanitarian assistance to those in needs is endangered by the double role-play. The politicisation of the humanitarian aid goes indeed beyond the actors directly involved. When governmental actors are simultaneously pursuing a military and a humanitarian agenda, humanitarian actors which are not engaged in the fight and intrinsically neutral suffer from similar consequences: they have difficulties reaching people in need. In the Syrian case, the same behaviour is adopted by IS towards all aid providers which means that aid is hardly delivered to people living in the areas controlled by IS. This is the most dangerous consequence of the politicisation of aid because it endangers people’s lives whose most basic needs cannot be met.

Lessons from Somalia but also from Afghanistan must be taken into consideration. In order to avoid reaching such situations, international actors like the U.S. cannot carry out a military and humanitarian action on the same soil if they want any of their activities to be effective.