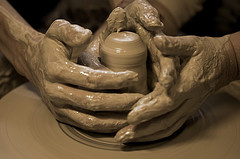 International development cooperation has been heavily criticised over the past decades. Both methods and objectives have been questioned, and involved actors are regularly accused of ineffective behaviour. What is less often analysed, however, is the human psychology on which international cooperation is based. Political motivations are often highlighted, and so are financial incentives, but the underlying patterns regulating those involved in the sector are all too often ignored. This is not a minor oversight. International cooperation actors are trapped in pre-existing psychological structures. These indirectly, and often unwittingly, create tendencies that corrupt the essential process and its true objectives. The main issue here is that cooperation in its true form is virtually impossible in the current sectoral psychology.

On the psychology of cooperation

The meaning of cooperation in international development cooperation can be described as ambiguous at best. It replaced more aid-based terms from the early days on, but the actual nature of the sector never quite made the same leap. Regardless, humans display a unique form of altruistic cooperation that is unprecedented in any other species on earth. Explanations vary from genetic predisposition to social awareness. In its most basic form, cooperation is defined as “the action or process of working together to the same end”. This means that both or all actors involved have a direct stake in the process. These actors can be individuals or groups, and cooperative individuals must have, amongst other factors, an underlying motivation to incur personal losses in return for improved common well being. The key here is “common wellbeing”.

Beyond that basic definition, it is clear that if humans can expect some kind of service or emotion in return for their action, they are much more likely to cooperate. Researchers find that human cooperation, on the scale as we can observe is attributable to prosocial cognition in the human psyche, clear groupings as well as cultural norms and institutions. These prosocial emotions make us sensitive to empathy; shame and guilt as well as social sanctions that could result from e.g. free riding. As such, humans are capable to differentiate between individuals or groups that are willing to cooperate – and tend to be drawn towards those individuals – and those who have solely egocentric intentions. Especially small-scale close-knit groups tend to be very sensitive to individual’s emotional capability to engage with others and cooperate.

Buchan et al (2011)  show in their research that willingness to cooperate and to risk losses varies dramatically over different social self-ascriptions. During their experiments, differentiating between local, regional and global individuals’ inclination to engage in cooperation depended on their sense of belonging to those groups. Few participants identified themselves with the global society, but those who did, displayed striking tendencies. Strong identification with the global society emerged as the sole indicator for willingness to contribute to global welfare: those who displayed this readiness were not influenced by whether their investment would pay off or not. The researchers conclude that conditional on self-identification, global altruism exists just as it does at lower scale levels.

At group level, cooperation looks slightly different, but remains based on similar principles. Groups are formed on the basis of mutual attributes that give individuals a sense of belonging to a specific group, such as cultural, language, political, religious or ethnic groups. Once established as a group, its maintenance is crucial, especially in competition with other groups. When inter-group competition is high, intra-group cooperation tends to function well. Generally, most cultures share prosocial values such as empathy or care for others’ suffering. In comparison, when no external pressures exist, intra-group cooperation tends to suffer, as individuals have fewer incentives to stick together. Even worse, when very high pressures are exerted on groups, their cooperative mechanisms tend to break down and be replaced by individual quests for survival. This last scenario can be observed in these situations of high social distress such as during wars, famines or economic crises.

On the psychology of the international cooperation sector

We therefore have a basic understanding of what cooperation is supposed to look like, and what some of its characteristics are. If we apply that idea to the international development sector, the first problem we face is how to identify cooperative individuals and groups, and with whom do they cooperate? At first sight the idea is perhaps that NGOs cooperate with local “beneficiaries” – please note how this word does not correspond to the definition of cooperation given above – and donors to accomplish outcomes in their field of expertise, such as economic development or human rights. In reality, however, local groups are typically consulted, but not cooperative partners. True cooperation exists between the NGO and the donor, or, in broader terms, the executive organisations and their funding partners. Their mutual goals are quite clearly defined: survival of the respective organisations through implementing common agendas. In this process, the role of local beneficiaries is passive. They do not represent true value in the cooperation equation, besides perhaps having a vaguely defined common goal of making lives better. The hard incentives to cooperate – funding, jobs, organisational survival, evaluations – are all between executive partners and funding partners. Idealism and gratitude are not satisfying conditions to reach true cooperation; they do not represent enough of an incentive, despite the sector’s appearances.

Understanding the imbalanced relationship between groups in international development cooperation opens a new perspective on its past failures and current realities. Many initiatives were created with altruistic intentions, often with the vision of bringing along sustainable change. However, the misunderstanding of cooperation and misuse of the word have lead to the establishment of ineffective mechanisms and programmes. Recipients were never truly part of the process while donors continued to operate on a system that was geared towards themselves rather than the outer world.

The recent economic crisis hit the developments sector particularly hard. Not only did the sector suffer under extreme budget cuts by donor governments and international organisations leading to financial gaps and instability, but it also faced an increasingly distressed developing world suffering under the pressures of the global economic turmoil. Many developing countries faced increased trade prices, and constantly shifting commodity prices bringing along extreme instability and little ability to plan ahead. The reaction by NGOs and other executive actors clearly showed where their true cooperative nature lies. Long-term programmes such as the Millenium Development Goal implementation plan were minimised. Many target countries and governments had to reassess their prospects and curb their progress. The shift towards self-preservation rather than international cooperation were dramatic and self-explanatory: in times of distress groups protect themselves first, rather than pretend cooperation with outsiders (local beneficiaries).  While these observations are barely surprising in the light of human cooperation and the need for self-preservation, they do hurt the vision the development sector portrays. Rather than truly caring for advancing developing countries, the sector’s work is hampered by reality and limits that donors are not willing to cross for the sake of international wellbeing.

Humans have an essential sense for self-preservation. Humans also have a unique trait for social interaction and altruistic behaviour. Hence supporting each other is just as much part of being human as it is to fight for survival. At the local level, cooperation is based on the mutual understanding that cooperation will advance the wellbeing of the group as one entity. At the international level, the overall benefits of cooperation are less clear, often phrased as increasing well being for recipients. Not only is it difficult to call international development cooperation, as groups within the sector never truly embraced it, but also visible positive effects of international development cooperation remain difficult to identify.

With growing understanding that the lack of incentives to cooperate with recipients left several development challenges unsolved, an opportunity for change is created. If the sector with all its member groups – donors, executives and recipient – understood the need for change, true cooperation could be achieved. It can be based on mutually engaging and trustful relationships where all partnering groups join mutually beneficial efforts to advance development. Just as we do one on one, international development cooperation taking into account global dependencies, could move towards being true cooperation if donors let go off their self-centred bias and recipients were to participate fully.  Various initiatives have already recognised the need for change and work towards enacting true and unbiased cooperation. With introspection and an outward-looking mind-set, the development sector can shift towards a more equal future.

MDGs, SDGs and the road to change: An outlook for sustainable development

The Future of Offical Development Assistance

Joanna Klever is a core team member at ReSeT. She specializes in public policy, governance and international cooperation.