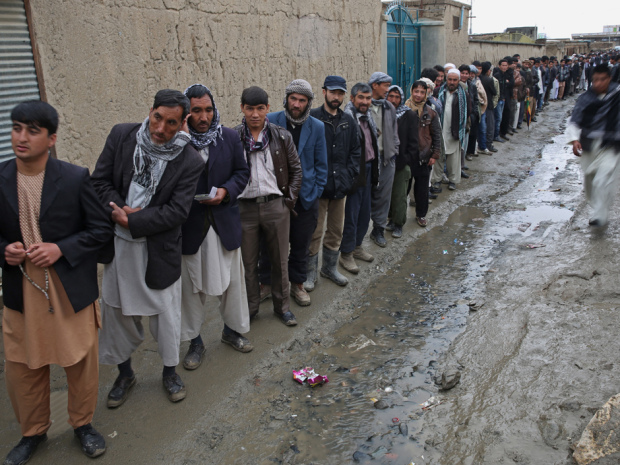 Despite the violence break-outs and the many Taliban threats all around the country, on April 5th Afghans went to the polls and voted in massive and unprecedented numbers. According to the Independent Election Commission (IEC) around 7 million people, 36% of them women, went to the ballot box in order to choose the future president of the republic. Abdullah Abdullah and Ashraf Ghani Ahmadzai turned out to be the leading presidential candidates, but, according to the constitution, the percentage of votes each of them won (45% and 31.56% respectively) are not sufficient enough to proclaim a winner. Therefore, the next step is the run-off election, held today, on June 14th. Will Afghans further support the political process? Will the Taliban threat become deadlier? Will local population and the candidates themselves accept the results? How will the results affect the American withdrawal? How do international media perceive it all? And, local media? Those last two questions have distinctly different answers. The way that the international media understands the democratic process in Afghanistan stands in sharp contrast with what local media understands about Afghan’s interests and expectations.

Many international voices have argued that a run-off election between the two head candidates is not the ideal path forward for the democratic process in Afghanistan. Since the country is divided by ethnic groups and both, Abdullah and Ghani, represent different parts of the population, many Western journalists have toyed with the idea of creating a coalition government between the two of them. While Ghani represents the Pashtun ethnicity in Afghanistan and the Uzbeks back him too, Abdullah is more closely identified with the Tajiks of the north who fought against the Pashtun-led Taliban, -even though his father was a Pashtun-, and many Hazarat have recognized they feel represented by Abdullah. Hence, for many, a hybrid government, which reunites the majority of ethnicities within two candidates, is preferable. If the “purpose of the election was to allow Afghans to choose a legitimate successor to Karzai” then we could say that “if Ghani endorses Abdullah, together they can claim the support of 75% of voters, far more than any sole candidate will ever obtain”.

However, ethnicity is not the only argument in favour of a coalition administration. The threat of Taliban attacks during the run-off have increased since the Taliban Spring has already begun and they feel ashamed because their bloodshed campaign during the first round of the election failed. This time they could be deadlier than before due to the fact the Taliban have to prove they can defeat the government and national security forces. This argument was underscored by the latest attempt of attacking the front-runner candidate Abdullah, who recently escaped a car bombing.

There is no doubt that the international community has applauded the Afghan effort of carrying out a rather peaceful and successful first round, but many concerns about security and electoral fraud have been raised for the run-off as well as the possibility of having warlords working extremely close to the new government-to-be. As Massoumeh Torfeh explains in her article “Afghanistan: Time for New Blood”, international circles have criticized both Abdullah and Ghani for choosing their political alliances within human rights abusers and alleged warlords when the majority of Afghans are demanding the end of the realm of strongmen and cronies and the persecution of past crimes committed by senior politicians and current candidates. Nevertheless, and even though the constitution bans “any individuals convicted of crimes against humanity, a criminal act or deprivation of civil rights by court from running for elected office”, the candidates could be accompanied to government by a minimum of four to five warlords. On the other hand, there is also a sense that a new generation of young men and women, working to change the old system of nepotism and cronies, are increasingly relevant. They were born and grew up amidst violent conflict, and they understand the needs and wants of their society beyond ethnicity and gender. Abdullah and Ghani are under increasing pressure to pay attention to such newcomers.

As Ms. Torfeh concludes her article “the second round of elections is a historical opportunity for the next president of Afghanistan to rise up to the challenge of making alliances with this new generation of activists and, at the same time, reducing the number of “warlords” in the cabinet. The presence of more strongmen in government would mean the continuation of most of Afghanistan’s acute problems including disregard for the rule of law, increased corruption, perpetuation of the narco-economy and the impossibility of keeping a check on good governance”.

In opposition to the aforementioned international idea of a coalition or hybrid government, the local media prefers to focus on respect for the constitution. In order to win the democratic battle, their argument goes, Afghanistan has to carry out a new round of the presidential elections, because that is what the constitution demands. In “Let the Afghan Voters Finish The Job” the local news agency Pajhwok Afghan News states that it is rather difficult to believe that there are some “behind the scene” conversations to create a coalition government since “the election has gone remarkably well so far” despite of some complaints of fraud and irregularities –already investigated by the Electoral Complaints Commission- and little violence. Even if some local voices claim that a possible coalition government between Abdullah and Ghani should be considered in order to –as international media has also said – let all major ethnic groups play a part and promote political stability, this is not the mainstream way of thinking among local analysts. Even national senators have encouraged Abdullah and Ghani to honor the constitution and to not ignore the votes of seven million men and women who want democracy to succeed.

Afghan media sees the pre-election campaigning as a successful mobilization of voters and a way of re-legitimization of the constitutional order. Just like the international media, local media applauded the first round. This does not mean, however, that the perceived success of the first round of the election is an indication of trust or support in the candidates, something that is much clearer at a local level than to observers around the world.

Security concerns are growing once again in the country. Since the recent attack against Abdullah, local media are questioning the stability surrounding the fragile political process, with the Taliban threat on the rise. The attacks have shifted from targeting the Independent Election Commission and its staff to attacking the candidates. If one of the front-runners gets killed, the constitution claims that a new election should be conducted, starting from scratch once again. Nevertheless, the Taliban threat might not be the real dilemma Afghans face: whereas local media do focus on these security issues, international media’s concerns with warlords becoming part of the government and wider political processes seems to be shared by the local population at large.

All of this said, a last minute deal between Abdullah and Ghani, which is unlikely to happen- could lead to a hybrid government undermining the constitution, hence favouring political expedience over democratic principles. It is ironic that Western media- representing democratic nations- seem less concerned about that than Afghanistan’s own media. Further taking into consideration the current alliances both candidates have, any new government would be formed by a dubious sources of political and military support. This, or so the argument goes, makes respect for constitutional fundamentals even more important. From a local media focus, the challenge Afghanistan is facing is the ability (or inability) of the nation to beat the Taliban threats and being able to achieve a rather peaceful political transition. The internal debate on the endemic trend of questionable alliances and more nuanced democratic challenges in government will have to wait.