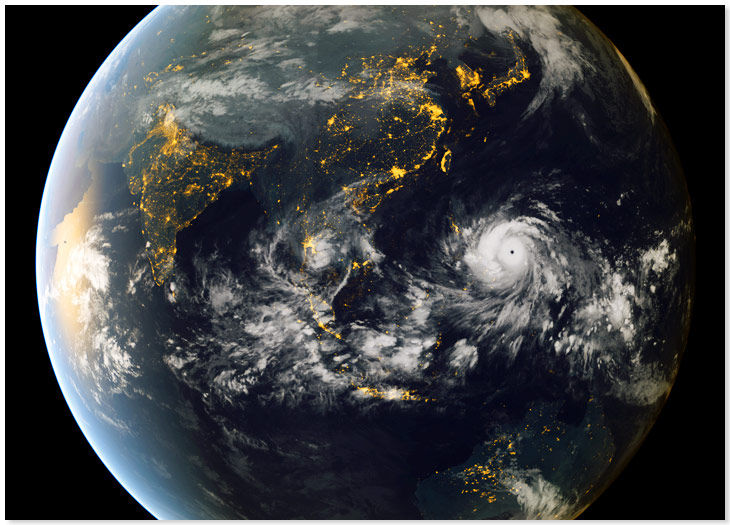 Climate Change? No, thanks.

The 19th Climate Change Conference held in Warsaw, last November, was held to start taking new measures on climate change by 2015. As has happened with previous summits, it ended with a minimal agreement to begin negotiations and outline the path towards global and binding arrangements on emissions reductions to be achieved, to be signed in two years in Paris. The conference demonstrated, once again, the unwillingness of certain government to combat climate change in any meaningful way.

By a quirk of fate, the start of the Conference coincided with the disaster caused by Typhoon Haiyan in the Philippines. The opening of the Summit was marked by messages of solidarity and support for the victims, and statements declaring climate change to be a possible cause of the disaster. In conjunction with the opening statements, there was also the event of the Philippines Delegate at the Conference, Naderev Saño, going on hunger strike until November 22nd (last day of the meeting) in an attempt to force real progress on the matter.

This time, the message of the Filipino Delegate was heard around the world; the image of him crying on stage was distributed by all media – but why did nobody pay attention a year ago, when his message was just as desperate? At the Conference held in Doha, Saño addressed the same audience asking for help to combat climate change through urgent action, especially considering the extreme situation of his own country.

The Philippines is the second most vulnerable country in the world to climate change, it faces an annual average of 22 typhoons. The delegate foccused attention on to the constant vulnerability and damage his society faces, but this core message passed almost unnoticed. The various sessions did not produce practical results, and thus repeated the experience of past conferences. Does anyone remember what decisions were adopted in Durban? And in Copenhagen? The answer is probably not, and no wonder, as very little progress has been made since 1992. Very few decisions were adopted during these summits, despite the importance of the issues at hand: issues that affect us all.

Climate conferences have been occurring since 1992, when the Earth Summit was held in Rio de Janeiro within the framework of the UN Framework Convention on Climate Change (UNFCCC). Since then, the most important landmark has been the adoption of the Kyoto Protocol in 1997. That agreement meant that the richest countries committed themselves to reduce emissions by 5% during the period 2008-2012 compared to 1990.

The Copenhagen Climate Conference of 2009, was presented to the world as one of the greatest opportunities to fight climate change. That conference turned out to be a fiasco. No new alternative arrangements were adopted, negotiations were a mess and the media presented it as such. The expectations before the meeting were so high that it was the only one that had media broadcast almost every minute. Consequently, the failure was magnified. A single agreement was reached: the commitment of major world economies, not subject to Kyoto, to set some voluntary goals to reduce greenhouse gases. Needless to say that this was a highly unsatisfactory outcome.

The last conference, held in Doha in 2012, concluded with a resolution to extend the commitment period of the Kyoto Protocol until 2020. A number of countries did not sign, typically the biggest polluters: United States, China, Russia, Japan and Canada. Likewise, this lack of commitment trumped the Warsaw Conference. For the first time, however, the frustration generated was so huge that some of the participating organizations left the city before the official closing of the Summit.

It is clear that within the current system, the adoption of measures and agreements in the field of climate change is very difficult, if not impossible. There is simply insufficient will among participants. Also, the Kyoto Protocol advocates sustainable development through the use of non-conventional energy, thus seeking to reduce global warming. These issues are systematically neglected during summits, which focus on the adoption of agreements and commitments related to emissions of greenhouse gases, while ignoring more practical issues that are equally or more important in achieving this objective. Meanwhile, between conferences and conference, time passes and the consequences of climate change are worsening. Emissions of greenhouse gases continue to rise, and those places where vulnerability is most severe and visible face increasingly difficult challenges.

Among those hardest hit are coastal populations, such as in the Philippines, who are increasingly vulnerable as sea levels continue to rise. This results in periodic flooding , making any reconstruction efforts difficult. But the sea is just one obvious example of what climate change can be and how people affected. Local communities face the problems first-hand, whereas the major global polluters simply participate in the numerous conferences.

By contrast, there some are countries, such as Peru and Ecuador, where states are taking steps to deal with the effects of climate change. In both these examples, national strategic plans have been adopted to reduce vulnerability in areas where the impact of climate change is strongest. These are exceptions to the rule.

On a positive note 190 countries met in Warsaw, but the aim of reaching an agreement to facilitate the next Conference to be held in Paris in 2015 is less impressive. Is it not more important to focus on taking practical decisions that empirically make practical improvements in the most vulnerable countries? Why are there no decisions being taken that are binding for the industrialized countries? The key issue remains the degree of commitment that all parties are willing to assume.

This was the main obstacle encountered by the various participants in the conference of Poland and for that reason, a minimal agreement was reached simply to keep the process alive. The consensus adopted replaces the word “commitments” to reduce emissions of greenhouse gases established nationwide by the non-committal “contributions”. That was the fomula that participants came up with to leave the door open to an agreement to be signed in 2015 and which will (supposedly) establish a defined limit to emissions for greenhouse gases.

That accord ended the obstacles that have hindered negotiations between rich and poor countries when it comes to sharing the problems of the limitation of emissions of greenhouse gases. The Kyoto Protocol only affects the developed countries and that is the reason why the United States refused to accept it, as it considers China and India as similarly responsible. For the same reason, the U.S. special envoy to the conference was not happy with the resolution adopted in Warsaw, as it does not accept that the more developed countries should take more responsibility for climate change and therefore, reiterated that the agreements to be signed in 2015 should be applicable to all countries, without exception.

In other situations, the US often positions itself as world leader, but interestingly enough, in this case, it refuses take up that role. It does not want to engage in the fight against climate change, because it may inevitably lead to it paying a higher price than competing nations, some of which are still developing economically.

Many steps must still be taken to fight climate change, but the clock is ticking. The climate conference in Warsaw was another failure where it demonstrated that the adoption of resolutions on this matter are almost impossible as some countries simply will not budge. For the first time ever, NGOs quit the summit and a special envoy went on strike. These circumstances should give notice to all leaders participating in such summits. Meanwhile, they continue to say: “Climate change? No, thanks”.